In the 1970’s, touring bikes were cool.  Touring organization Adventure Cycling got its start in 1976 as Bikecentennial which organized a 4250 mile ride across the country on the Bicentennial of the USA.  Then came mountain bikes in 1981 with the introduction of the Stumpjumper by Specialized.  The straight bars and more upright seating position made for a comfortable bike to mess around with on the weekend.  In the 90’s the touring bike and the mountain bike became combined into a  “hybrid” of the two.  I remember doing a lot of mountain bike handlebar conversions to road bikes around that time.  Did the hippies of the 70’s become the yuppies of the 80’s and get real jobs that wouldn’t let them take off to find themselves all summer?  Is that what happened to touring bikes?  That’s one theory and I resemble that remark.

There seems to be a resurgence of touring starting to surface.  We are getting more and more calls from people interested in travel by bike.  The baby boomer generation and their grandkids seem to be leading the charge.  My fellow boomers are hitting retirement age and spending more of their time and energy on having fun.  The grandkids are finding a harder time of it getting a lifetime job out of college and are hitting the road instead.  The younger, more nimble (and broke) crowd tend to go for traditional touring bikes like the Fuji Touring.  For less than $1000 you get a true touring bike with a rear rack, low gearing for carrying a load up hill and study wheels and frame. 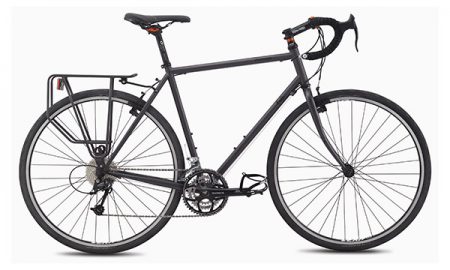 My generation tends to favor comfort over cost and are buying recumbent trikes and bikes for their touring pleasure.  I doubt if many of us have fond memories of our bike seats from when we were kids.  Recumbents feel like lawn chairs on wheels compared to traditional bikes.  Two wheeled recumbents take a while to get used to but are worth the time to master.  Recumbent tadpole trikes like the one pictured are instant gratification-there is no learning curve or balance needed to ride them.  And that seat just can’t be beat for all day comfort. 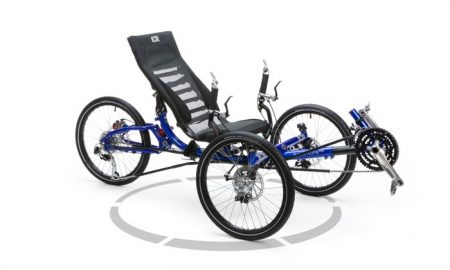 One of our customers has this very trike-an Ice Adventure named Blaze.  Her first outing was half way across the USA.  Then came England, Ireland and Scotland.  Then New Zealand and South East Asia.  Now she’s getting her trike ready for a tour from Portugal to Turkey.  I think there’s something to be said for those early retirement offers.

However you decide to try it, I hope I stirred up some interest in touring for you.  Whether you start out doing overnights after work or head out on a world tour I think it could change your life for the better.