I was looking over the Velonews Buyers Guide this morning in the privacy of my own bedroom.  Looking at it is a lot like looking at the Sports Illustrated Swim Suit edition-something you like to look at but aren’t too proud of.  There’s something sadly similar about looking at super models and $10,000 bicycles.  You know they are unobtainable for the average man, way too light to have that many curves and no way are they going to be around very long.

The Fuji Roubaix is the bicycle version of the “girl next door”.  Her aluminum frame isn’t as light as those carbon beauties and not quite as curvy.  The Roubaix will be around for a  lifetime while the high priced supermodels are often warranted for three to five years.  The best thing about the Roubaix is that they start around $1,000 not $10,000 so a normal guy can afford to have one in his life. 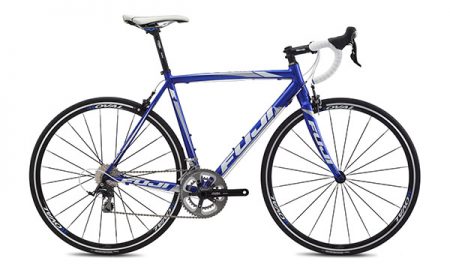 This past summer I got a chance to ride a Roubaix over my usual hilly training route six or seven times.  It handled it just as well as the super model bikes I’ve owned-a Specialized Tarmac and a Cervelo RS.  The Fuji was fast handling, stiff for climbing and didn’t beat me up on the bumps.  You would think there would be a big difference in weight between them but there wasn’t.  With pedals the Roubaix weighed 20lbs, the Specialized 19 lbs and the Cervelo 18.75 lbs.  That’s a pound or so difference for bikes that cost two to three times as much.  I think the carbon soaked up the bumps slightly better than the aluminum Roubaix but I doubt I would notice the difference if I went up a tire size to a 700 X 25mm.  As far as looks go, that’s up to the eye of the beholder.  I admit that I like the way a carbon bike can be shaped into some fast looking curves.  I love the way a lugged steel bike looks like a piece of art that was hand built.  Most aluminum bikes look no nonsense, very utilitarian to me.

The Roubaix has been Fuji’s best selling and longest running road bike model.  This is the perfect bike for a beginning racer or century rider who wants a nice bike without breaking the bank.  Bicycling Magazine had this to say about the Roubaix 1.3,”The brand’s [Fuji’s] mission remains the same-to produce good bike’s at a fair price.  That ideal is evident in the lower cost Roubaix 1.3.  The bike’s A6-SL custom butted aluminum frame sports high end features like a tapered head tube and press fit bottom bracket.  And the Shimano 105 components are durable and reliable.”  If you are looking for your first good bike I would encourage you to give the Roubaix a test ride before you buy. 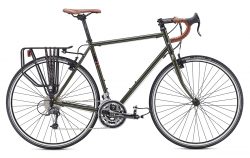 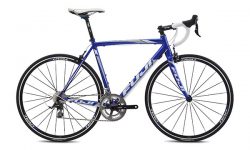 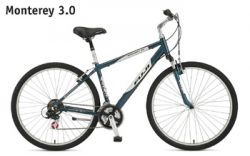