RANS has discontinued their Force 5 le and replaced it with their new Rifle monotube SWB recumbent. It come with dual 700c wheels giving rider position similar to the Force 5’s with dual 650c.
This page is left up for historical purposes.

The ride is similar to the RANS V-Rex or Rocket which were always among my favorites. Like the Rocket and V-Rex, it has a 4130 Chromoly steel frame. One improvement over the V-Rex design is that the Enduro Sport seat height is a bit lower making it much easier for shorter riders to start and stop.

The Force 5 is RANS new dual 650c-wheeled SWB recumbent. As it isn’t due out until March 04 I can’t tell you what it feels like, yet. It will be made in the USA, which is nice. There will be two versions: the $1595 Force 5 LE and the $2195 Force 5 XP. They both use the same frame and come in two sizes and two colors, Silver or Red. If their goal was to come up with a dual 650c wheeled bike to compete with the Bacchetta Strada and Corsa it looks like they succeeded.

The Force 5 should be easily the fastest RANS bike ever sold. Lighter and faster than even the more expensive RANS V2 Formula, the Force 5s will use road bike components. Of course, if you prefer an LWB you will prefer the Formula. To each their own.

The Force-5 LE will have the well-known RANS seat but the XP will feature their new, lighter, Zephyr Seat with more recline adjustability. Both Force 5s seats are about 23″ from the ground. The Zephyr seat weighs about 3.5 pounds, including a Rad-Loc seat clamp. This is 1.5-pounds lighter than the standard RANS seat.

The Zephyr seat does not have mounts for water bottle holders like the other RANS seat. You will have to get a seat bag and a camel back, not a problem for longer rides but for a quick hour ride, I find the ease of filling and mounting a bottle more convenient. 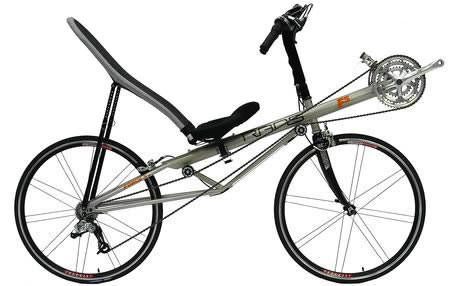 The Force 5 frame is triangulated. This gives good strength with thinner wall tubes. The result should be a stronger, stiffer frame of about the same weight that is a bit more expensive to build. If you feel bumps more than you like on the Force 5 you will want to get the optional thicker, heavier seat pad to cushion the road vibrations.

The Force-5 bikes will be light. The LE should be under 29 lbs. and the XP under 26 lbs. with the new Zephyr seat. Sizing of the frame will be similar to current RANS bikes. If you take the XL size RANS now you will take an XL Force 5.

The handlebars have quite a bit of up and down adjustment. Most riders will like the Force 5 handlebars just above the knees. In this position, the bar should be below your line of sight unless you recline your seat a lot. The Force 5 does not come with a flip-it stem to save a bit more weight. Fore and aft handlebar adjustment is limited to two positions, with the riser forward and with it backward.

Dual 26” and dual 650c bikes handle more like road bikes. On the Bacchetta Strada and Corsa, I can ride no-hands briefly. RANS says the Force 5 can be ridden no hands “up and down hills” and “through curves.” Riding no hands is unsafe (and illegal in most states…)

Whether you are looking for a bit more performance than your current recumbent or a lot more comfort than your road bike, the Force 5 is worth a test ride. Try the Bacchetta Strada or Corsa too. Find your favorite! 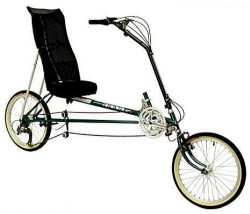 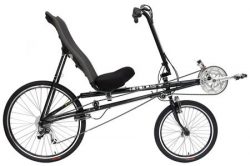 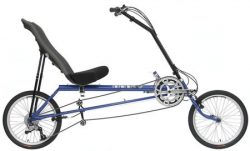 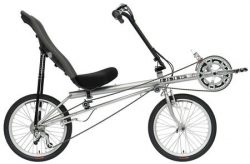 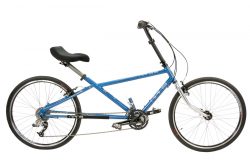 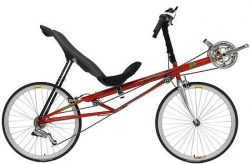 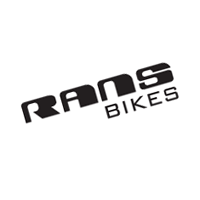