The first delta trike from Greenspeed has arrived! Now the Hase KettWiesel has some competition. We have both the Hase and the Anura in stock and ready to ride so you can decide for yourself which suite you best. I’ll review them further here soon.

Previously tagged the “frog” this new Greenspeed delta trike is now known as the Anura. The 2007 model is a great deal at $2450 with the Schlumpf speed drive giving 16 speeds. Its high gear is a bit lacking. If you are interested in high speed you might want to consider the Hase KettWiesel, but at ~$3500 with 2 wheel drive, you might not. In a tight space, the Anura cuts a pretty small turning circle, in both directions. Adjusting it to fit different riders requires changing the chain length making it hard to share this trike between two riders. We recommend trying both the Hase & the Anura before deciding.

In future years Greenspeed is considering 3 Anura models, with one new model released each year. The three Anura frames will likely be pretty similar if not the same the difference being in the components. The 2007 Anura frame size is Medium/large size, the small medium should become available in 2008.

The Anura’s drive train will have a 13-28 rear cluster with a Schlumpf Speed Drive at the cranks. This will give a great range and good high gear even with the It will also allow the use of a short cage rear derailleur for better ground clearance and leave a spot on the left handlebar for a mirror.

It will have the Avid mechanical discs on all 3 wheels with a 2 into one for the rear brakes and a single for the front. Wheels will hold three 16” (349) tires. Overall weight will be just about 40 lb.

Colors available will be Yellow/Black and Silver/Black in a pattern as shown in this picture.

You will be able to stand it on its end to save floor space. The crank extension will be marked to more easily change between two riders. A RANS seat will provide plush seating. Recline angle will be adjustable with non-incremental sliding seat braces (instead of the common “grenade pin” system.) We will see how the RANS seat is in the side support department for that fun hard cornering (weee!). There will be a versatile boss welded into the rear of the frame for attaching a trailer or hooking another Anura on to have a tandem extension.

For accessories, there will be a tandem/trailer coupler, racks for carrying loads, a place for a mirror, computer, lights, and fenders. Three water bottle mounts will be available, 1 on the frame between your legs, 2 on the back of the RANS seat. Of course, the RANS seat bags will fit so you can carry a hydration bladder if you prefer.

Front lights will mount straight into the top of the fork and a universal rear light mount will clamp to the seat top rail (and still allow it to stand on end). Lights could be mounted to a number of different positions on the rear of the trike.

For the Dynamo fans (a favorite at the Greenspeed shop) they suggest a front dynamo hub will be best. 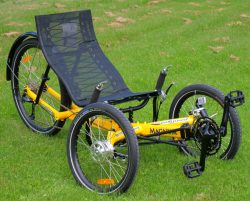 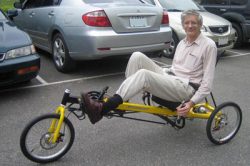 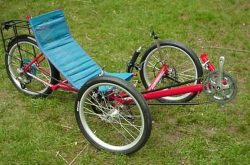